Ağın (in Elazığ province) located to the west of Keban Dam, is an important area opening to the Erzincan Plain by Kemaliye (Eğin) to the north, and to the Malatya Plain by Arapkir to the west. Karasu and Murat rivers merged in Ağın before the construction of the Keban Dam. The fertile region of Altınova, situated to the east of Keban Dam Lake has become an area of intense investigations due to its large mounds bearing a central character. However, the archaeological works carried out around Ağın to the west, is limited. Within the scope of the Keban Project, excavations were carried out by Prof. Ümit Serdaroğlu at Hoşrik Area, Kalecikler Mound, Kilise Yazsısı and Kalaycık in Ağın region between 1968 and 1972. However, the material uncovered as a result of these excavations, unfortunately, remained in the Elazığ Museum depo without publication due to his untimely death. In this study, we are presenting the preliminary data on Hoşrik Area and Kalecikler Mounds material group. As a result of this study, we can talk about the exact similarity between Hoşrik Mevki and Kalecikler Mound in terms of historical development. Both settlements seem to share the historical process of the Elazığ Malatya region. What kind of settlement model these centers in the west of the Keban Region are in and their importance in the Upper Euphrates Basin settlements will be only possible with the evaluation of all materials. 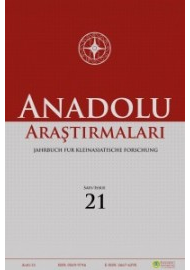