Since the incorporation of decree powers into the Turkish constitutional system in 1971, the Constitutional Court (the Court) had adopted a disposition which has tended to construe decree powers in a narrow margin. In this context, the Court looked for additional conditions besides the conditions set in the constitution for the empowerment of executive with decree powers: the tripartite test which required that the empowerment should be urgent, necessary and important. The Court acted in a similar way for emergency decrees by examining them - although the supervision of emergency decrees is prohibited in the constitution. Thanks to this attitude, decree powers both in ordinary times and emergencies were restricted and used with aims solely seen necessary to abolish the reasons which caused the usage of decrees. However, the Court changed its case law regarding decree powers and opened the way for the possibility of executive influence on law making. For ordinary decrees, it abandoned the practice of looking for “extra” conditions not present in the constitution’s text in 2011. With its judgment in late 2016, the Court gave up controlling emergency decrees as well. This retreat by the Court has greatly influenced the recent inflation of executive dominance in Turkey. 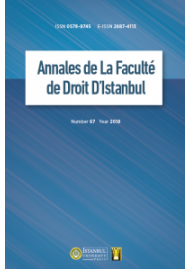