Evaluation of the distance between the central teeth after frenectomy: a randomized clinical study

Purpose: The present study aimed to evaluate the periodontal status and the distance between the teeth one year after frenectomy in patients with abnormal frenums in the maxillary and mandibular midline.

Patients and Methods: This study included 50 patients (24 men and 26 women) between the ages of 13 and 53 who have frenum-induced diastemas between the incisors. The abnormal frenums were removed via conventional frenectomy. The distances between the teeth before and one year after the surgery were measured with a caliper. To determine the periodontal status, the pocket depth, plaque index, and bleeding on probing were measured from four surfaces. In addition, the amount of attached gingiva and degree of gingival recession were recorded and were statistically analysed.

Results: A significant decrease in the distance between teeth before and after frenectomy was observed (p<0.05). There was a statistically significant difference in the amount of gingival attachment, pocket depth, degree of gingival recession, plaque index, and bleeding on probing (p<0.05).

Conclusion: The removal of abnormal frenums with frenectomy can contribute to the reduction in the distance between the teeth. In addition, frenectomy increases the amount of gingiva and decreases the depth of the pocket, gingival recession, amount of plaque, and bleeding. 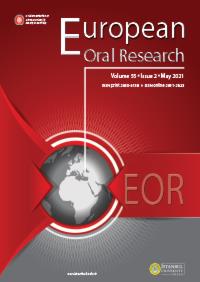