In organ failure, pre-transplant immunoassays are cost-effective and sensitive tests performed under the supervision of a specialist team. The aim of this study is to develop a more economical and easy to handle method that is relatively easy to perform in vitro with coculture models. Peripheral blood mononuclear cells from permenant hypoparathyroidism patients (n=4) were co-cultured with parathyroid cells of two different donors both with and without a barrier. Parathormone and cell counting were determined at 24 and 72 hours of cultivation. Parathormone levels were significantly increased in two separate parathyroid cell groups, whereas the cell number was significantly decreased in both groups. Peripheral blood mononuclear cells did not show a significant change against foreign parathyroid cells in both co-culture groups with barriers and without barriers when compared with the control group. In this study, the co-culture model, which is easier to manipulate than other sensitive tests, was performed. Basically, in order to determine the process of predicting the survival of the transplant which was carried out at a lower cost. However, the two separate co-culture models did not create a significant difference for parathyroid cells and peripheral blood mononuclear cells both in the presence of a barrier and without a barrier. In future studies, different methods should be used to experience prediction of survival by performing more sensitive tests. 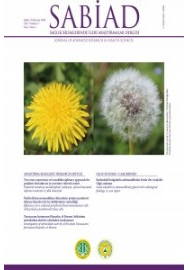