The thoughts of the Gramsci, presented a national hegemony understanding with his masterpiece The Prison Notebooks, analyzed how capitalist system survives despite its deadly serious inner contradictions, was adapted to international system by Neo-Gramscian scholars and this new interpretation used to determine fundamentals of the global hegemony, as well. The contemporary world hegemony, accepted to begun in the 16th century with the United Provinces (Holland), and it is alleged that passed to the United Kingdom in the 19th century and then to the United States following to the Second World War. However, the economic recession, triggered by the crisis caused by the end of the bipolar world order following the end of the Cold War, peaked with the 2008 global financial crisis. For this reason, American hegemony began to be questioned with a higher voice. In that case, the high growth rate provided by market-based reforms after Mao’s death in 1976 has played an important role in bringing China into the forefront of the US as a major economic power since the early 2000s. Above mentioned situation, coupled with America’s decline, has led to the emergence of rumors that China is the new hegemonic power of the world. However, when analyzed from the Neo-Gramscian perspective, a state, who could become a hegemon in the global level, should have a leading economic system, a socio-cultural and political superstructure suitable for this substructure, and a network of international organizations, that are fostering these values all over the world.

The concept of hegemony is generally defined as the power, established by one unit over the others. Because it cannot be executed by force alone, this authority should be supported with consent, for the duration of it. At this point Gramsci pointed out that the main hegemon in the system is a social class determined by a production method, and this class rising the hegemon position by gaining the consent of the other ones. The hegemony, described by Gramsci in national level, adapted to international system by Neo-Gramscian scholars, and these scholars indicated that the world hegemony realized by internalization of the values of a social class, emerged in a state. It is generally accepted that hegemony started with the emergence of the capitalist economic system, because of the pre-capitalist societies, which had a closed economic cycle system, aren’t useful for understanding of international hegemony.

The United Provinces (Holland), where capitalist system firstly emerged in 16th century, was accepted as the initial hegemon state of the world. The hegemony of the United Provinces passed on to England, which had become the world’s largest capitalist state in the 19th century by carrying out the industrial revolution. And it is alleged that the hegemony of Britain has been transferred to the United States, which has emerged as the greatest capitalist state of the period after the Second World War, paralleling the economic and political turbulence experienced between the two wars. But, after the end of the Cold War, the United States has begun to face with new crises, affected by the instability and economic decline created by the disintegration of the bipolar system in the world. Especially the 2008 economic crisis, which affected the whole world, caused the future of American hegemony to be questioned with a higher voice.

China has been transformed into an important economic power since the early 2000s with the high growth rate of the market-based reforms initiated by Deng Xiaoping, who came to power after Mao in 1976, and following that it became the world’s largest exporter state in 2009. For that reason, it was started to be claimed and questioned that China, which is expected to pass the US in terms of economic size in the 2030s, turned into a global hegemony with a higher voice.

When approaching the Neo-Gramscian perspective, an actor, who would like to become a hegemon, should turn into a power center both economically and politically, and spread its values all over the world through international organizations, designed by it. Analyzing the hegemony situation in this respect, it is claimed that, despite the economic power triggered by the impressive growth, China’s economy is highly fragile due to base on export economy mostly financed from the outside, so it is alleged that China’s economic growth could be tackled, in the event of a contraction of its export markets. The best example of this is the decrease in the growth rate of the PRC in parallel with the decrease in exports due to the contraction of the international markets in the 2008 global financial crisis.

On the other hand, in order to become a global hegemon, China should build a sociocultural and political superstructure that is coherent for its economic substructure. To this end, in order to define itself as a peaceful force against the imperialist past of the west, China adopted Confucianism, which made a great deal of moral values, as a state policy, and tried to introduce itself to the whole world in this way. However, in particular, the violence prone policy imposed in the Xinjiang-Uyghur autonomous region, human rights violations, and the unilateral and provocative activities in the controversial areas of the South China Sea, adversely affected the image, which China tried to create.

Moreover China should legitimize its economic and political values through the international organizations that is established by it, in order to become a global hegemony. The structure of the international organization, that underlies the US hegemony, has been mostly built after the Second World War. And China is member all of these organizations except NATO. First of all, China legitimizes the existing system established by the United States, because of its membership to all of them. On the other hand, the weight of him in the decision-making mechanisms of these organizations is extremely low. The organizations as Asia Infrastructure Investment Bank and Shanghai Cooperation Organization, led by China as an alternative to above-mentioned organizations, remained largely local both in terms of the covered area and the number of members as compared to the organizations led by the United States.

As it is seen, when China’s hegemony situation is analyzed from the Neo-Gramscian perspective, it can be said that China cannot be called as a hegemon because it isn’t subjected to qualifications, that should be possessed by a hegemon, and it is impossible for it to gain all of them in a short period of time, as well. 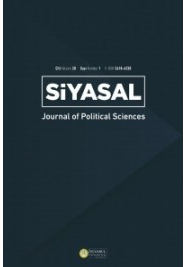