A Study on the Assessment of Cultural Competence in Bilingualism: The Case of German Translation and Interpreting at Istanbul University

Culture, which includes all the knowledge of a society, is one of the most important components of translation. When the translator is not able to perceive the cultural symbols of the text or he/she is ignoring the culture of the target language and the target text will lose its function. Thus, the starting point of this study is built on the way in which the monolingual individual perceives a foreign language through comparison and abstraction and how it is received by bilingual individuals, and how it is reflected in the translation process constitutes. This study includes a survey used to examine the cultural competence of the bilingual first-grade students of German Translation and Interpreting at the Istanbul University department of Translation Studies. Furthermore, translation from German to Turkish and vice versa and a translation assessment grid are used to gather data as regards the translation of the recipe for “simit” (Bagel) and “Brezel”. The data acquired from this study is also examined in the context of cultural competence; thus conjectures are provided as regards the cultural competence of bilingual students.

Cultural elements are important constituents of translation, which is defined as an intercultural communication activity. Broadly speaking, it can be said that culture is the sum of the traditional ways of life, ideas and artistic assets of a society and it creates the unity of a people who speak the same language. Language is the element which makes cultural interaction and intercultural communication possible. Naturally, intercultural interaction is formed when different cultures make contact with each other. It is inevitable that this contact happens through translation. In the process of translation, the world view and the perception of culture of the translator is a key factor for the message to be delivered to the recipients as intended. The functionality of the target text depends on the reception of the cultural elements in the translated text by the translator and his/her consideration of the target culture. Thus, the translator’s reception of a foreign culture is an important issue.

The concept of bilingualism is explained in the next section. It can be seen that the studies in the field evaluate bilingualism using different criteria. This study is based on early and late bilingualism criteria, in which the factor of time (i.e. age) is prioritized, in compliance with the definition of individual bilingualism.

The third section is comprised of the application. A combined model is developed for the application based on the models which measure cultural competence and bilingualism. In accordance with the model, first, a survey was conducted to determine the bilingual profiles and investigate the culture and language relations of the first-grade students of Istanbul University, department of Translation Studies, German Translation and Interpreting. Next, the recipes for “simit” and “Brezel”, which are located in the cultural systems of their respective cultures, were translated from Turkish into German and vice-versa, respectively. At this point, it is important to remember that a recipe is a text type that is specific to the culture to which it belongs. The sample group was asked to conduct a translation review on the final step of the application.

The findings of the application were analyzed in the context of cultural competence of bilingual students in the conclusion section. The findings indicate that the members of the sample group did not have the same level of command of both cultures. Most members of the sample group were born and had completed their primary education in Germany, completed their secondary education in Turkey, and had been actively speaking Turkish in recent years. This findings overlap with the students’ claim that they translate more easily from German into Turkish. The fact that the language and culture of their families are Turkish explains the better understanding of the cultural items in the Turkish language that they show. The students’ reduced activity in the German language and their lack of exposure to it cause difficulty in composing texts in German, and they claim that they are now slower. The students’ self-view of language competencies and the results of the translations do not comply. The blank parts in the translations, conveying the dictionary meaning and untranslated words may indicate that the students were not able to compensate for their lack of cultural competencies with their language competencies. In this context, it can be concluded that the students need to improve their cultural competencies. The methodological education that the first-grade students will receive in their academic translation training is one primary way to improve their cultural competencies. 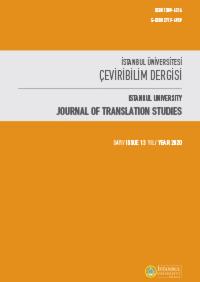