It is stated that night work is a necessity in terms of the community. However, this type of work leads on to important discussions, particularly due to its negative impacts on the health of the workers. Thus, there are many restrictive provisions with respect to night work, one of which is related to the limit regarding the night work period. With the amendments made in 2015 to the Labor Law, a new provision allowing for the limit to be exceeded regarding the night work period in some sectors (tourism, private security and jobs related to healthcare) entered into force. This amendment required revisions in other regulations concerning night work as well. Although it is now stipulated, in accordance with the amendments, that the worker’s approval in writing must be obtained in order to perform night work for more than seven hours and a half, it seems hard to indicate that such amendments provide adequate protection to the workers. Our study contains the general characteristics of night work, and some discussions with respect thereto. Accordingly, it is aimed to evaluate the last amendments introduced regarding night work in connection with the current discussions on the subject, and to provide solutions to the identified problems.

Night work has been the subject of many discussions due to its contradictory nature to the biological structure of the human body. This attribute of night work requires that night work and day work should not be handled in the same way in the legal order. The developments in the field of Occupational Health and Safety Law, and the researches regarding the effects of night work on the human health, constantly demand the review and improvement of the regulations regarding night work. In this regard, the most important protective provision regarding the workers working at night could be the limit on the night working time. In accordance with the Article 69 (I) of the Labour Law No. 4857, “night” is defined as the period starting at the latest at 20.00 in the evening, and lasting at the earliest until 06.00 in the morning, which in any case lasts maximum eleven hours. Furthermore, in accordance with Article 69 (III), night work shall not exceed seven and a half hours. However, significant exceptions have been recently adopted to this rule. The amendment, enacted in 2015, allows employers in some sectors (private security, tourism and jobs related to healthcare) to demand night work in excess of seven and a half hours by obtaining written approval from the worker. It should be noted that the regulations concerning night work are particularly important regarding the work carried out by shift work. Taking into consideration the need for governing special procedures and principles on this subject, a regulation specifically on shift work has been issued, and exceptions to the rule on the limit of the night working time are also included in this regulation. In my opinion, the propriety of this change amendment is highly debatable. It can be argued that the service should continue uninterruptedly in the sectors mentioned in the Article (private security, tourism and jobs related to healthcare). However, the employment of the workers for longer periods is not the only way to ensure the continuity of the service. Although written approval of the worker enabling the night work in excess of seven and a half hours is stipulated, the worker-protective approach of the Labour Law which protects the workers even from themselves, especially on the issues regarding occupational health and safety should not be disregarded. It should also be noted that the Regulation on shift work also includes a statement which is not included in the text of the Labour Law. In the Regulation; it is prescribed that the workers employed by the subcontractor in the workplaces, where private security, tourism and health services are carried out, also fall under this scope. If the letter of the statement is followed; it could be concluded that all workers employed by the subcontractor in the health, tourism and private security sectors may be employed at night for more than seven and a half hours. However, it is clear that such an interpretation would be incompatible with the exception regulated in the Labour Law. The provision of the regulation should be interpreted in a manner to cover subcontractor workers who are employed in the sectors referred to in the Labour Law, specifically in cases where subcontracted work is carried out with respect to these sectors. It has been concluded that the recent changes in the field of night work constitute a reversal in terms of workers’ rights. It is clear that the continuity of the services without disruption can be also maintained by increasing the number of shifts. Furthermore, I would like to draw attention to the fact that the regulations regarding night work are quite disorganized. In this regard, it may be suggested that all the rules regarding night work should fall into a single regulation. As a result, it may be stated that there is a need for the review of the regulations on night work in our legislation. 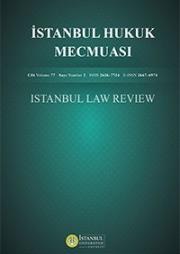