This study aims to discuss Ahmet Hamdi Tanpınar’s monograph Yahya Kemal, published shortly after the poet Yahya Kemal’s death. It focuses on Tanpınar's attempt to examine Yahya Kemal’s personality, character, worldview, poetic aesthetics, and position him in the history of Turkish literature. In addition, this study discusses the cultural, political and literary implications of this attempt. Using the discussions on the concept of the monograph, it investigates Tanpınar's evaluation of Yahya Kemal's ideas by comparing them with modern trends in the history of Western European modern thought. It also considers his poetic production in relation to world literatures, in order to show the singularity and uniqueness of Yahya Kemal’s personality and literary productions in relation to other Turkish authors from both his own and the previous generation. It argues that in directly placing Yahya Kemal at the center of the Turkish nation-building process and modern Turkish poetry, Tanpınar underlines the poet’s skillfulness in the nationalization and domestication of Western European cultural and literary traditions, in which he interacts according to the needs of the modern Turkish nation. The article thus demonstrates that Tanpınar transforms his monograph into a narrative that invents Yahya Kemal as the poet of the nation-building process by reconnecting the current literature of the Turkish nation through his creative dialogue with classical Ottoman poetry.

This study examines Ahmet Hamdi Tanpınar’s monograph Yahya Kemal, published shortly after the poet Yahya Kemal’s death in 1958. It focuses on Tanpınar’s attempt to discuss Yahya Kemal’s personality, character, worldview, and poetic aesthetics, and to position him in the history of Turkish literature. In order to analyze the political, cultural and literary implications of Tanpınar’s work, it explores how Tanpınar approaches Yahya Kemal’s life and work, in order to show the singularity of his self-identity and poetic aesthetics in the period of transition from Ottoman Empire to the Turkish nation-state in the early twentieth century. More specifically, relying on the concept of the monograph, this article investigates Tanpınar’s evaluation of Yahya Kemal’s ideas, by comparing them with modern intellectual and philosophical debates in the history of Western European modern thought. It also considers Yahya Kemal’s poetic production in relation to world literatures, in order to show the uniqueness of his personality and literary productions in relation to other Turkish authors from both his own and the previous generation. The study contends that in directly locating Yahya Kemal at the center of the Turkish nation-building process and modern Turkish poetry, Tanpınar attempts to underline the poet’s exceptional skill in the appropriation and domestification of Western ideas and cultures, according to the needs of the modern Turkish nation, by engaging with recent intellectual and literary movements in Europe. In this way, Tanpınar transforms his monograph into a narrative that invents Yahya Kemal as the poet of the nation-building process by reconnecting the current literature of the Turkish nation through effective negotiation with classical Ottoman poetry. In examining the complex nature of this monograph, the article provides a close reading of its opening pages, in which Tanpınar describes his first encounter with Yahya Kemal when he was a college student at the University of Istanbul during the Turkish War of National Independence. Carefully analyzing the narrative techniques, vocabulary, and details used by the author in the portrayal of Yahya Kemal, the article shows how this rendering serves for Tanpınar to challenge the thematic and structural conventions of the classic monograph, generally devoted to a single author’s life and his/her work. In this first scene, the monograph successfully intertwines both the narrative techniques of autobiography and prose fiction in his portrayal of Yahya Kemal, thus creating an aesthetic enchantment, as defined Rita Felski, on the reader. This shows how even in the opening passages Tanpınar transgresses the established thematic and formal conventions of the classic monograph. The opening passage also lays the groundwork for the complex and multilayered composition and theme of Tanpınar’s monograph that simultaneously incorporates various literary genres and scholarly methods. This unusual approach greatly contributes to the layering, pluralization, and complexity of Tanpınar’s book in terms of its narration, composition, theme, and discourse, thus essentially transforming it into a network of multiple narratives and artistic genres. In addition, the article critically examines the political, literary and discursive implications of Tanpınar’s monograph. It argues that he wrote this monograph to underline the singularity of Yahya Kemal’s individual self-identity and poetic creation by locating his life and work in the context of the Turkish nation-building process between 1912 and 1922. In this regard, Tanpınar focuses especially on Yahya Kemal’s ability to engage with Europe and the Ottoman past. This helped Yahya Kemal appropriate and localize modern European intellectual and philosophical movements, and also revitalize Ottoman poetry in a new Turkish context. It also contributed to his imagination of a modern Turkish identity, based upon the premises of a united Turkish language, culture, and literature produced in Anatolia and the Balkans since the arrival of the Turks in the eleventh century. According to Tanpınar, Yahya Kemal thematically and linguistically reconnected the new Turkish literature with classical Ottoman poetry, that had been separated from one another following the rapid literary changes in the Ottoman Empire from the mid-nineteenth century. Yahya Kemal achieved this by producing poetry in the traditional Ottoman aruz meter, while using a common Turkish language by means of creative communication with classical Ottoman poetry. The article concludes that Tanpınar’s book on Yahya Kemal often challenges the thematic scope and formal conventions of the traditional monograph, while also showing how Yahya Kemal essentially renovated Turkish poetry during the nation-building period in Turkey. 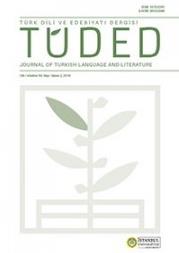