Diversity components are explained with different concepts, approaches, and methods. Biodiversity conservation in specific areas of rich plant species diversity and endemism rate in Turkey is significant enough to be managed sustainably. Identifying biodiversity at different scales is one of the most critical steps before implementing protection measures. In the Mediterranean region, plant species are in danger due to various factors: expansion of urban areas, rapid population growth, and fire. Against these threats, it will be a useful initiative to focus on areas with diverse species and to give priority to conservation in these regions. In this study, plant species diversity was calculated with the alpha (α) and beta (β) biodiversity indices, using data collected from fieldwork in the two river valleys, Kargı and Karpuz. The Shannon–Wiener index (αH) was used for alpha species diversity, and Whittaker’s index (βw) was preferred for the beta diversity index. As a result, the areas with the least alpha diversity in the Karpuz River valley are the source and the upper course of the river and the areas with the highest diversity are the lower and middle courses. Beta diversity is high in the upper course and less in the lower and middle courses where anthropogenic activities are dominant. In contrast, in the Kargı River valley, alpha and beta diversity is low in the middle part and more in the upper and lower courses. For all plant species diversity of the two valleys, Whittaker’s gamma diversity index (γ) was used and the Kargı River valley was identified as the priority area for conservation.

Biodiversity models are mostly used in the identification of areas where the species show high variation, i.e., richness, to determine the priority areas in conservation plans. The method selection and size of the study area is selected according to the purpose of the study to be performed.

The process of inventory creation, which forms the basis of biodiversity calculations, requires many preliminary studies such as limiting the study area, selecting sample areas, and determining the plants to be included in the diversity. In this study, the two river valleys were compared in terms of the plant species richness to discover the area that should initially be protected in the conservation plans. The sampled valleys were Kargı and Karpuz, where the streams take their resources from the south of the Central Taurus Mountains and drain their waters into the Mediterranean Sea. The Kargı River valley, which has 26 nationally rare species taxa and has no official protection status, faces the threat of tourism and urbanization. The river is in the region defined as the Toros Mountains Plant Diversity Center (SWA No. 15). The Karpuz River valley surrounded by large settlements such as Manavgat is also at risk for the same reasons. The Karpuz River valley also has no official protection status.

In this study, the Shannon–Wiener indice (αH) was used to define alpha (α) diversity, Whittaker’s beta diversity indice (βw) was used for beta (β) diversity, and Whittaker’s gamma diversity (γ) index was used for gamma diversity. With fieldwork conducted in the same phenological period in the two river valleys, the rates of the coverage area and habitat characteristics of each plant layer (herbaceous, shrub, and woody plant species) in the sample areas were recorded and coded. Before the field study, valleys were divided into 10 × 10 m2 grids by Fishnet in the GIS environment. Sample area determination was used only as a reference; main sampling sites were created in places with high plant species diversity and abundance, with observations in fieldwork. A total of 175 different plant species were identified in 160 sample areas (80 each in the per valley), and the density ratio of each species was recorded.

The high alpha diversity values in Kargı River were ÖA18 and ÖA20A, ÖA8A, ÖA9A, and ÖA11A. The low alpha diversity values were in ÖA17C, ÖA15C, ÖA1D, Ö17B, and ÖA17D. The areas with low value are in the middle of the stream bed near the Dereköy settlement, where the grazing and livestock activities have gained intensity. In Kargı River, beta diversity was high in ÖA8, ÖA3, ÖA4, ÖA10, and ÖA20; it was low in ÖA13 and ÖA15, ÖA17, and ÖA16. Almost all the areas with reduced diversity coincide with the middle of the river valley.

In the areas close to the source and the estuary of the Kargı River valley, plant diversity was high. The slope is quite steep in the middle part of the stream, making it difficult for plant growth. There are dense Pinus brutia forests in relatively flat areas with deep soils. The forest cover of coniferous species is weaker in species diversity. Another reason is that different types of plants can settle in larger areas where the riverbed width is relatively increased. According to the gamma results, which are evaluated by considering the whole valleys, the Kargı River valley has more diversity than the Karpuz River valley, so it should be protected first. 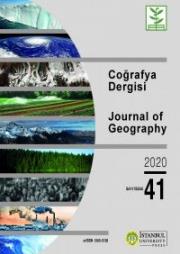