This study examines the approach of the British parliament to the Turkish Federated State of Cyprus (TFSC), announced on 13 February 1975. Britain together with Turkey and Greece became one of the three guarantor powers of the Republic of Cyprus founded in 1960. Britain also has two military bases on the island. Thus, Britain closely followed the developments in Cyprus. After the Cyprus Peace Operation in 1974, a new situation emerged on the island. Turkish Cypriots established the TFSC in the north of the island. In the statements made by the British government, there was a negative reaction to this new administration. British deputies brought the issue to the agenda of the British parliament. Both opposition and ruling party representatives reacted negatively to the announcement of the establishment of the TFSC. They also criticized the ruling Labour Party government for failing to prevent the announcement of the TFSC. In addition, the steps which Britain could take in the Cyprus problem were discussed in parliament. Within this context, the article analyses the debates in the British parliament after the announcement of the establishment of the TFSC and gives a general assessment of Britain’s approach to the Turkish Cypriot decisions. This study, which is the result of a detailed examination of minutes taken at meetings of the British parliament, contributes to the field by examining British policy towards the Cyprus issue and Turkish-British relations.

Cyprus has for many years attracted international attention due to its strategic location. The island came under Ottoman rule in 1571. In 1878, British forces took over the island from the Ottoman administration, in exchange for protection against Russian attacks. In response to the entry of the Ottoman Empire into the First World War on the side of Germany, Britain added the island unilaterally to its own territory on 5 November 1914. During the negotiations in Lausanne, the Turkish side accepted that Cyprus belonged to Britain. The declaration of the establishment of the Turkish Republic of Cyprus took place on 16 August 1960, with both Turkish and Greek Cypriots taking part in the administration of the country. However, the Republic of Cyprus was not able to continue for long. Clashes resumed on the island after Makarios attempted to restrict the rights acquired by the Cypriot Turks in the 1960 constitution.

Some MPs expressed in the British parliament that Britain, which is one of the guarantor states in Cyprus, should take more initiative in seeking a resolution to the Cyprus problem. In response to this proposal, government officials pointed out the necessity to continue negotiations between the Turkish and Greek Cypriots for peace in Cyprus. British deputies expressed that there would be no results from long-standing inter-communal talks. They argued that the British government should follow a more active policy for peace in Cyprus. Government officials disagreed with these suggestions and stated that Britain could not act alone. Other guarantor states in Cyprus would have to agree together on a solution. Thus, the government did not take into consideration the active policy proposal for a solution to the Cyprus problem. Finally, another issue that came up after the announcement of the establishment of the TFSC was the situation of British citizens on the island. Some MPs proposed to open an official representative office within the boundaries of the TFSC for British citizens. However, British government officials opposed this proposal.

As a result, MPs in the British parliament did not accept the announcement of the TFSC. Furthermore, there were deputies who said that the Turks should not be declared solely responsible for the Cyprus problem. However, this view did not cause any change in the policy of the British government and the TFSC was not recognized by the British government. 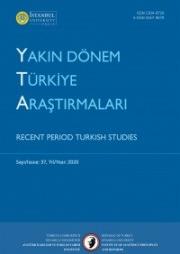