Plastic pollution in marine ecosystems is one of the most important study topics in recent years. The toxicity, mobility and long-term persistence characteristics of plastics create risk in ecosystems, biota and human health. In this study, the levels of heterotrophic bacteria attached to the surfaces of commonly used plastic types; polyvinylchloride (PVC), polyethylene (PE), and polypropylene (PP) were tested in a mechanical experimental system prepared with seawater under controlled conditions in laboratory. The seawater, which was used in the experimental system, was taken under aseptic conditions from the Golden Horn Estuary, located in the Istanbul region of Turkey. Three different types of plastic (PVC, PE and PP), in two different (glass slide (76x26 cm) and virgin micro pellets (5mm diameter) size, were placed in the experiment setup filled with seawater and incubated for 28 days at ambient temperature. At the end of 28 days, the counts of heterotrophic bacteria were tested using the spread plate technique on Marine Agar (Difco), in both plastic surfaces and surrounding seawater. The levels of heterotrophic bacteria were recorded to be lower in the seawater surrounding the micropellets and lam-size plastic samples. The seawater sample bacterial levels were recorded as 12x109 CFU/ml, at the start of the experiment. At the end of the 28th days, it was recorded to be 83x109 CFU/ml. The highest levels of heterotrophic bacteria were recorded as 41x1010 CFU /cm-2 and 61x1010 CFU /cm-2 on the lam-size surfaces and the micropellet surface of the polypropylene samples, respectively. In the experiments, the PP plastic type has been recorded as a more preferred plastic derivative by heterotrophic bacteria according to the PVC and PE plastic types, but there has been no significant difference in the bacterial adhesion rates on the surfaces. The study contributed increasing knowledge on the bacterial approach to microplastics types. However, there is a need for long term studies related to the mechanism of bacteria attached to microplastics. 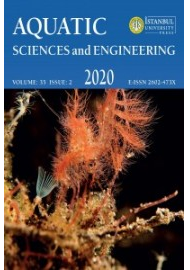