Basic Methods in Transition from Violin to Viola

The violin and viola belong to the string instruments family. Although physically similar, the two are distinguishable because of right- and left-hand technical differences, key usage, sound color, and size. The viola has a larger grip, and its right- and left-hand techniques differ from the violin. When converting a department from violin to viola, it is important to learn the historical process in the development of the instrument. Then, the basic knowledge and practices— such as the technical differences between right and left hands, holding, key reading, intonation, tone production, and vibrato—would accelerate students’ adaptation process. In this study, basic technical information—except the methods and suggestions based on the author’s personal experiences and those during the transition process—are discussed in detail. The study aims to focus on the technical differences between the viola and violin despite their physical similarities. Printed and online sources have been used and analyzed in this study. Students must be guided using the suggestions created to convey the differences between the instruments to those transitioning to complete the adaptation process accurately and consciously.
Keywords: Violin, Instrument Transition, Viola
DOI :10.26650/CONS2019-0015   IUP :10.26650/CONS2019-0015    Full Text (PDF)

The violin family reached its present form in the 17th and 18th centuries with the development process in history. The viola, a member of the violin family, was overshadowed with accompaniment pieces during the early periods. With the prominence of chamber music and orchestral works, the viola began to gain value, leading to solo compositions. Georg Philip Telemann composed the first viola concerto. The F Major Viola Concerto that was later composed by Carl Ditters von Dittersdorf, Johannes Christian Bach’s Viola Concerto, and Karl Stamitz’s Viola Concerto were also included in the viola repertoire. In the 20th century, the viola solo repertoire was composed by important composers of the period, namely Paul Hindemith, Bela Bartok, and William Walton.

After the viola attained a solo identity, viola artists began emerging. In addition to those who started their education with the viola, some artists started with the violin but continued with the viola. Recently, some artists who graduated from violin departments have gone on to be viola players in orchestras. In this study, information is given to students who switch from violin to viola to ensure an easy and mindful transition process. The suggested methods and recommendations considering research and experiences are evaluated in seven headlines.

1- Differences between Violin and Viola

1- Differences between Violin and Viola

The violin and viola differ in terms of size, length, strings, and clef. These lead to differences in grip and playing techniques for the two instruments. Violin, which has a soprano timber, is played using the treble clef, whereas viola, which has an alto timber, uses C clef. Considering its size, the viola has a different tone than the violin, with chords five notes lower and thicker strings.

There are differences in grip between the violin and viola. Since the viola is a larger and wider instrument, the arms must be distant from each other. The left arm should be more open than with the violin, and the wrist position should be kept at a wide angle. For the left-hand fingers to move freely on the touch, the viola’s balance must be maintained, keeping the thumb free and straight without squeezing and ensuring it moves with the entire hand in position transitions. Since the viola bow is heavier than the violin’s, the fingers must be kept in a slightly more open position.

Intonation is the most important stage of the transition process. For correct resonance of full tones, they should be pressed more mildly than with the violin. In this process, major–minor scales and arpeggios, as well as exercises selected from Schradieck and Sevcik methods, provide the basic studies for intonation.

For a qualified tone, balance at the resonance point is important. The speed and pressure must be balanced correctly. The weight of the right arm should be evenly distributed over the fingers. The softening of the string changes by wrist movements and the continuation of the weight given while pulling the string is vital in tone formation.

Vibrato is necessary for musical expression. A good tone needs consistent, uninterrupted vibrato. The speed and extent of the vibrato should be based on the musical characteristics of the performed piece.

For a smooth switch from violin to viola, students must know the differences between the two instruments. Due to the large size of the viola, differences in grip require rightand left-hand exercises. The study aims to help the transition process by highlighting the technical differences between the violin and viola despite their physical similarities. This research examined and utilized published and online resources on the subject. 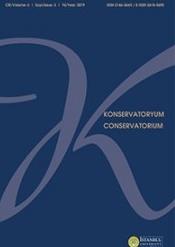