The Effect of Institutions and Human Capital on Economic Growth: The Case of Turkey

Regardless of the level of their development, economic growth is one of the main goals that all countries wish to achieve. Classical production factors such as physical capital, labor and natural resources, which were considered sufficient in previous periods for economic growth, have become insufficient due to the acceleration of information and technology production along with the globalizing world. It has been stated by many economists that the factors such as geography, culture, human capital and institutions are effective as new sources in addition to the classical factors mentioned in the countries’ economic growth in unlimited competition environment. The formation of knowledge, which has become the most fundamental production factor today, is strongly dependent on human capital. On the other hand, institutions are the set of rules and restrictions that shape the interaction between people. Therefore, it is assumed that institutions affect knowledge formation both directly and indirectly through human capital. In short, institutions make significant contributions to human capital accumulation, and human capital accumulation has a positive impact on the performance of economies by accelerating technology and product growth. Institutions include written elements and unwritten factors such as family, firm, education, customs, traditions and customs as well. Institutions constitute the basis of social structure. Institutions are among the priority concepts in explaining the growth differences between countries. Institutional economists argue that good and strong institutions have positive effects on national economies while they emphasize that bad and weak institutions affect growth negatively. Poor and weak institutions hamper the growth and development of countries causing instability on investments and the economics of the country. Good and powerful institutions accelerate technological developments and information transfer processes; it also strengthens investment, production and social relations; it promotes social welfare by providing the development of human and physical capital. There are many studies investigating the relationship between human capitalgrowth and institutions-growth in the literature. These studies, which have emerged since the early 1990s, have concluded that human capital and institutional factors in general have had a positive impact on countries’ economic growth. However, there are not many studies examining the effects of human capital and institutions, which are among the indirect sources of growth, on growth together. In the studies, it has been generally observed that panel data or cross-sectional data analysis have been performed for many countries. This study differs from the studies mentioned since it investigates the impact of human capital and institutions jointly on the economic growth in Turkey sample. In the study, the impact of institutions and human capital on economic growth in Turkey has been analyzed using annual data for the period covering the years 1960-2014. In the model, consumption (public and private) expenditures, capital stock, interaction of human capital (schooling rate) and political freedoms index have been used as independent variables while Real GDP has been used as the dependent variable. Considering that human capital is not independent of institutions, human capital and political freedoms index variables have interactively included in the model in multiplicative form. In the empirical analysis, firstly the stationarity of the variables has been tested with the Augmented Dickey-Fuller (ADF) Unit Root Test. According to the results of ADF unit root test, it has been determined that the series are not stationary in all cases with constant, constant and trend, constant and no trend. When the first differences of the series have been taken, it was observed that the series became stationary. After the stationarity test, the relationship between related variables has been analyzed by using ARDL bounds test approach developed by Pesaran et al. (2001). ARDL bounds test is a method which has an advantage in testing cointegration when the variables are I(0) or I(1). This method has better performance in small samples than traditional cointegration approaches. In addition, this approach allows estimation of long run and short run coefficients simultaneously. According to the F statistic value obtained from this test, it has been determined that there is a cointegration relationship between the variables. CUSUM and CUSUMQ tests examine structural breaks of variables have been used to investigate the long-term dynamic stability of the results obtained from the ARDL model using the squares of the reversible error term. When the CUSUM graph has been examined, it has been concluded that there is no structural break in the variables used at the 5% significance level and long-term coefficients calculated under the ARDL bounds test are stable. When the error correction term is analyzed, it has been seen that the error correction mechanism works. The error correction term has been found negative and significant in accordance with the expectation. According to the results of empirical analysis, consumption expenditures and capital stock growth positively affect economic growth in Turkey for the mentioned period. In addition, in the study it has been found that the variables of human capital and institutional factors, whose effect on economic growth are considered to be essential, together have a positive effect on growth. This result is consistent with the results of previous studies Barro (1994) and Dias and Tebaldi (2012). In this context, policies aiming to increase the quality of human capital and institutions must be determined and implemented in a planned manner in Turkey. In particular, more effective legal arrangements and practices in many areas such as the prevention of corruption in the institutional sphere, the guarantee of fundamental rights and freedoms, and property rights are needed. In addition, necessary investments should be made to create qualified human capital accumulation and long-term and contemporary policies should be implemented in order to improve the education system which is the main source of this factor. Finally, it should be mentioned that this is the first study examining the impact of human capital and institutions together on economic growth in Turkey. In this context empirical findings are limited. Further research using different methods and variables is needed. 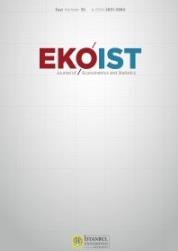