Purpose To compare MEP which is originally manufactured for increasing bond strength between organic resins and ceramic with conventional surface treatment methods in preparation of leucite-reinforced FC surfaces regarding shear bond strength (SBS) of stainless steel brackets and the mode of bond failure. Materials and Methods Forty specimens that were fabricated from FC material and glazed were randomly assigned to four surface conditioning methods: (1) CoJet Sand; (2) MEP; (3) HF acid etching followed by silane coupling agent; (4) Diamond bur followed by silane coupling agent. The SBS was determined using universal testing machine. Bond failure sites were classified according to Adhesive Remnant Index (ARI). Results No statistically significant difference (p>0.05) was found in SBS between the groups while significant intergroup differences were detected concerning ARI scores (p<0.001). Group 1 had ARI score 1 and 2 indicating mode of failure at the adhesive interface with greater percentage of the adhesive left on bracket base. The other groups had higher frequency of ARI score 3 and 2. The quantity of the ARI retained on the ceramic surface was highest in Group 3, followed by Group 4 and Group 2. Conclusion MEP can be a suitable alternative for bonding metal brackets to FC surface. 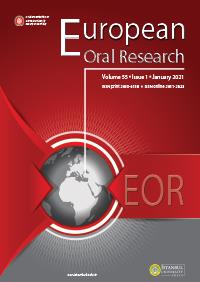