The Qur’an, which is revealed as a verbal-linguistic address, has revealed a new way of thinking parallel with the language system used by the interlocutor audience and the possibilities of this language. In order to actualize this address-addressee dialectic, it took into account the perceptions and concepts of the society it was revealed to and formed a common world view formed by the values of the society such as language, faith, culture, and history. In addition, it actualized the most beautiful transformation and change of the mindset by using the Qur’anic Style, namely, the Uslubu’l-Qur’an, which is the language’s own style of expression, verse, and language form. This study aims to identify the main subject of Surat Al-Infitar by taking into account the methods special to Uslubu’l-Qur’and offered as a linguistic method of understanding the Qur’an, and the relationship between the interlocutors and the environment they are in and explain the way this subject is expressed. In this sense, our study strives to see the constructional structure that plays a role in manifesting and turning the warning expressions for doomsday ‒like the sky will break apart, the stars will fall‒ into action mostly “here‒now” as a part of the Qur’anic style and deal with the surah in this framework. In this context, the surah talks about the cosmic changes that took place during the events of the doomsday which transforms into kalami action through Allah’s taqwini laws and turns this action into morality. In this sense, the verses ultimately emphasize “the coming of the revelation, its possibility, and its nature” through the reality of the change in the cosmic structure.

Religion, which means “path, faith, tradition, bond, servitude” in all cultures, is a phenomenon that changes individual and social life with very strong influences. From this point of view, religion plays an important role in the formation of an individual's personality by contributing to their level of consciousness. We can also say that each religion has established a common ‘language of religion’ to form a common perception. In this respect, revelation is a sign this common language of religion and a state of communication in which God himself addresses in a language that humans speak. In other words, the revelation -word of God- that determines an individual's relationship with themselves, their surroundings, and God is presented to human understanding using the Qur'an's own linguistic and stylistic characteristics within the possibilities and limits of the Arabic language. Hence, in order to actualize this addressaddressee dialectic, the Qur'an takes into account the perceptions and concepts of the society it was revealed to and forms a common world view formed by the values of the society such as language, faith, culture, and history. Moreover, it actualizes the most beautiful transformation and change of the individual's mindset and identity by using the Qur'anic Style, which is the language's own style of expression, in verse and language form. Indeed, the correct understanding of the divine word is made possible by taking into account its distinctive Quranic language, its style, and its ikhbari (pronouncement) and inshai (constructive) sentence structures in parallel with its style of expression. In this way, it contains the transitivity in which one can be included in the context of the other from time to time in the course of the Qur'anic style, and it turns into the inshai structure, which is a higher style of the ikhbari form, and drives its addressees to change their actions.

This study aims to identify the main subject of Surat Al-Infitar by taking into account the relationship between the addressees and the environment in light of the methods that are unique to the Qur'anic style offered as a linguistic method of understanding the Qur'an and the style of the language of religion that encompasses the whole of the Qur'an. In this sense, our study takes into account the constructional (inshai) structure that plays a role in manifesting and turning the warning (ikhbari) expressions for doomsday -like the sky will break apart, the stars will fall- into action mostly "here-now", beyond the informing of the future apocalypse. Therefore, the study tries to address the surah as a whole within the framework of the specific language structure of the divine word and the Qur'anic style. Thanks to this information that forms the basis of the method of the Qur'anic style, the verse(s) and/or the surah turns the gayb (invisible) sphere like the apocalypse, the judgement day, the hereafter into an active "event" and a new "action" happening "here-now" through the issues of the testimonial sphere of this world in a style that can be understood by all. As it were, the surah creates the comprehension of the truth of the revelation, which is first and foremost the first stage of the God-man relationship, through the reality of the change in the cosmic structure. And it also creates the understanding of "the hereafter with the consciousness of reckoning". Accordingly, it lays the burden of personal responsibility to the individual and it shows how the will and power of the divine truth manifests.

In this context, the surah talks about the cosmic changes that took place during the events of doomsday which transforms into kalami action through Allah's taqwini laws and turns this action into morality. The surah begins with "doomsday" scenes that can be described as "the sudden occurrence of an event and/or the beginning of cosmic change" as if to show a new era is about to begin. The word infitar, which gives its name to the Surah, means "splitting, disturbing the existing order, interfering with something". And in this context, it is interpreted as "without knowing its nature, the revelation of the commandments of God to the Earth either through the descent of the Angels or by the greatness of the Lord". In our opinion, these events are aimed at drawing attention to the reality, nature, and possibility of the divine revelation, as well as emphasizing to their addressees that the old corrupt order will be replaced by a new one. As a matter of fact, when we take into account the revelation course of the Qur'an, we see that it conveys its divine message to a society where the majority were illiterate and thought it impossible for Allah to send his divine message to its addressees by means of a human being who also was illiterate. In addition, the context of forward-looking ikhbari statements reveals to us the inshai structure of the issues towards this world. In this sense, the surah builds a religious and moral consciousness through taqwini/qawni verses beyond just giving information. The point that draws attention here is that the qawni verses are both verses themselves, and that they are accepted as signs, prognostics, that is, intellectual evidence of the truth that exists in their own selves. It reflects the greatest evidence for the positioning of the revelation the fact that all beings, including the earth, sky, and man, with their apparent–known features witnessed by themselves are a verse. And it plays a role in the comprehension that they are all parts of the same whole, including this revelation. Moreover, in the minds of the addressees, who thought that it was impossible for Allah to send his message through the Prophet Muhammad Who was ontologically human, the entity to which they ascribe sanctity gains a new meaning and the actions created by this meaning explain the possibility of such revelation. Thus, a consciousness about everything that the Allah-universe relationship represents is created in the addressees and the absolute creative power behind this truth is pointed out. Therefore, the main subject of the surah is the creation of the awareness of the day of reckoning and the understanding of the hereafter, which is put forth with a style that is simultaneous with the possibility of the divine revelation, its nature and its reality.

In line with this perspective, our work offers to read the depictions of the doomsday which belongs to the gayb for humans, the topics concerning the hereafter like the awareness of the day of reckoning in inshai form in the context of Qur'anic style. In this respect, our article attempts to understand and explain the effects of the Qur'anic style that are reflected in this world and which turn it into action and morality here and now, not in terms of the “reality and/or awareness of the scenes of the apocalypse”. Of course, this study, taken in the context of the Qur'anic style, is an effort aimed at basing not the style itself but only its method and, in parallel, determining the main idea of the surah. 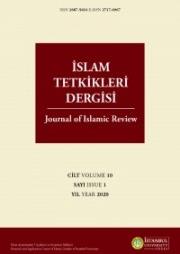