Sovereign Credit Risk Rating: Examining the Relations between Domestic Economy Data and the Probability of Default

Sovereign credit ratings have gained importance in financial markets. Sovereign ratings have the function of providing necessary information in a common language between market participants who need funds and investors. Sovereign credit ratings affect countries’ borrowing costs. Additionally, ıt affects the decisions of foreign investors and investment funds, to invest in the related country. In sovereign credit risk approaches, various data is used for assessment such as balance of payment, domestic economy indicators, external economy, financial sector status, income and population data, and public finance data. In the scope of this study, the relation between domestic economy indicators and the probability of default are investigated. The logistic regression method was used in the study. The Sovereign default data is analyzed and categorized. It was observed that GDP data, exchange rate, and consumer price growth rate are high explanatory variables that explain the probability of default. G20 countries were included in the study and examined between the years 2008-2017. As a result of the study, the increase in USD exchange rate and a decrease in the GDP in USD have been a factor that increases the probability of default for countries.

Sovereign credit ratings are quite important for relevant countries’ access to finance and their credibility in financial markets. Credit rating agencies do not recommend a buy or sell, they only produce ratings for issuers. In practice, investors may prefer to use ratings in order to manage their portfolios. Sovereign ratings provide information about willingness to pay its debt and especially for the debt service quality of the sovereign. Cantor and Packer, investigated the main factors which affect sovereign rating. They also examined the market price and sovereign rating. Afonso continued to study factors of sovereign rating and to expand the scope of whether developed and developing countries produce a similar response to the same rating sub-factors.

As defined before, a sovereign rating consists of a large variety of information that predicts optimal creditworthiness. The main items are balance of payment, domestic economy indicators, external economy, financial sector status, income and population data, and public finance data. The Sovereign rating methodolgy of credit agencies was investigated in section three. Standard & Poor (S&P) Moody’s, and Fitch are the leaders in credit rating agencies. The S&P rating approach consists of institutional assessment, economic assessment, external assessment, fiscal assessment, and monetary assessment. The institutional and economic profiles and flexibility and performance profiles give sovereign rating results. Moody’s rating approach consists of economic strength, institution and governance strength, fiscal strength, and susceptibility to event risk. Government financial strength and susceptibility to event risks give sovereign rating results. The Fitch rating approach consists of macroeconomic outlook, policies and prospects, public finances, external finances, and structural features. Those agencies use the GDP, GDP growth rates, GDP per capita, and consumer price index, etc. to assess domestic economy profiles. Additionnaly, when the GDP is not concentrated in certain sectors and includes economic diversity as a feature, it increases resistance to economic shocks. It affects the credibility assessment of sovereigns positively. Another important variable is GDP per capita. GDP per capita is used as a measure of income and a high level of value is considered favorably in terms of the credibility of the country.

The main goal of this study is to indicate the relation between domestic economy indicators and the probability of default. The default data was obtained the Bank of England and the Bank of Canada databases and categorized in order to use for regression. A categorized version of the default data was used as a dependent variable in the model. A broad set of independent variables were analyzed such as the GDP data, GDP growth rate, exchange rate, consumer price growth rate, reserve money status, and gross domestic investments. The logistic regression method was used in the study. Fundamentaly, the logistic regression method returns the probability of realization of the dependent variable Y. After the necessary data optimization was made, an interactive grouping was performed on the data. Within the scope of the study, variables with a correlation above 60% were not included in the regression analysis. In this study, some of the analyzed data was reserved for use in a validation study. Seventy percent of the analyzed data was used for model development and 30% was used for testing the developed model. The exchange rate, consumer price index, gross domestic investments, and the GDP(USD) were used in the model as explanatory variables. The weight of the GDP data in the model was 29%, the consumer price index data was 27%, and the local currency on USD basis was 24%. These three types of data are highly effective in predicting a country’s probability of default. As a result of the study, non default probability was produced. It was observed that when there was an increase in the USD rate level, there is a natural decrease in the GDP levels in USD due to the increase in exchange rates. This situation was reflected in the indicators to increase the probability of default data. 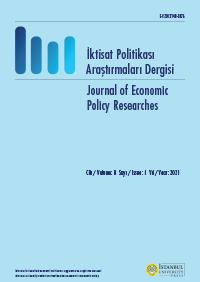