Due to its economic functions, including that of a planning strategy for the future, state budget as a management tool requires the transition from a traditional structure to a modern one. In the modern budget systems principally implemented today, effectiveness and the efficiency of the results are taken into consideration rather than the cost of the services provided by the state. Although there are various types of modern budget systems, program budget and performance-based budget systems have been implemented in Turkey. Modern budget systems were put into practice in order to change the input-oriented structure of the classical budget. However, structural problems and the inability to measure the outputs at the desired level have resulted in the budget systems going back to the traditional structure. The aim of this study is to evaluate the changes in the methods applied, legal and institutional structure of the Turkish budget system and the problems that have emerged, starting with the General Accounting Law No. 1050 and until today.

The historical process of the Turkish budget system can be said to go back to the Ottoman period when regular budget system was based upon the 1839 Rescript of Gülhane (Tanzimat Fermanı). As a result of the Edict of Reform (Islahat Fermanı) issued in 1856, the budget became a document submitted to the Sultan’s discretion. The first budget document, prepared between the years 1863 and 1864, shows the Ottoman Empire’s financial condition in a modern sense. Despite all the Tanzimat period’s efforts, work on the budget could not be completed due to the lack of financial stability. The increase in foreign debt and the interventions from other countries via the privileges derived from the Duyun-ü Umumiye Administration resulted in the restriction of tax and budget rights.

After the proclamation of the Republic, the budget right was put into practice again with the Constitution of 1924. Along with this constitution, annual budgeting principles, allowance for the collection of revenues, making expenditure with annual budgets, and the negotiation and approval of the budgets in parliament were adopted. Issues related to budget and taxation, which reached a legal dimension with the 1924 Constitution, were made regular with the 1924 budget law.

From 1927, when the General Accounting Law No. 1050 came into effect, until the 1960s, principles based on the classical budget system were applied in the budgets prepared. The most important feature of the classical budget system is that it is based only on inputs and does not consider the quantity and characteristics of the outputs to be obtained. In accordance with this method, the budget is prepared for the current year only and does not involve long-term planning. Its focus is on which administration will make public expenditures. In the 1960s, the public sector actively participated in the economic development and the use of state expenditures and revenues as effective tools of the development policy. However, both public expenditures and public revenues were too inadequate to meet the objectives and financial reform studies were necessary.

In the 1973 fiscal year, the classical budget system was abandoned for the first time, and the Program-Budget system was implemented. Although there are many advantages and the model implemented in Turkey lasted until 2006, the expected success was not achieved. The public administrations that emerged due to expansion in the state organization were excluded from the scope of the budget regime and from Law No.1050, and the state budget and budget regime deviated from the budget principles with the addition of new institutions to these administrations. Besides, the enormous increases in budget deficits necessitated a greater public financial management reform compared to what was the case in 1973.

Public Financial Management and Control Law No. 5018 were approved by the Turkish Grand National Assembly on December 10, 2003 and came into effect in 2006. This system aims to increase transparency and accountability in public finance, to transition to multi-year budgeting based on strategic planning and performance, to expand the scope of the budget, to harmonize internal control and external audit systems with European Union standards, and to expand the initiatives of public administrations in the field of financial management. In this context, the budget system was changed in line with efficiency and productivity objectives, and the performance-based budget system was put into practice. Performance-based budget practices have contributed to the development of medium and long-term planning understanding in public administrations, creating a performance management culture, and the development of institutional capacity in this field, thereby achieving significant gains in the public financial management system. Nevertheless, the weak link between the purposes laid out in the superior policy texts and the budgets prepared according to the analytical budget classification is the failure to include performance information prepared by the budget of public institutions to the extent requested. The fact that the current system does not significantly differ from the classical budget system has led to a new discussion about changing the budget system.

The final restoration in the related laws was made on October 16, 2020. With these changes, a performance-based program budgeting was put into practice. The new system is not a substitute for performance-based budgeting, but attempts have been made to integrate it with the system currently being implemented.

This study was prepared to evaluate the changes in the legal and institutional structure of the Turkish budget system between the period from the General Accounting Law No. 1050, enacted in 1927 to today. Moreover, it focuses on the reasons for the re-implementation of the program budget system with a new arrangement made in the budget system since 2020. 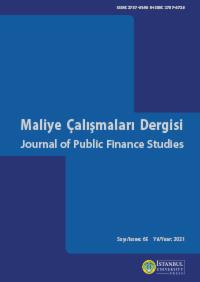