The Image of Narrative Prosthesis in McDonagh’s The Pillowman: Normality vs. Psychopathology

This study aims to examine The Pillowman—a noteworthy play written by the postmodern British playwright Martin McDonagh—in the context of the narrative prosthesis introduced by David Mitchel and Sharon Synder under the umbrella term ‘disability studies’. The study examines the characters in Mcdonagh’s play in terms of their literary characteristics in relation to the concepts of ‘normalcy’ and ‘disability’ within disability studies. In this context, the study revolves around McDonagh’s creation of ‘existential’ aspects of ‘disabled’ characters which has implications for the meaning of the play, the politics of the anomaly, and the narrative and disability relationship. The article explains the concept of narrative prosthesis as well as a number of interpretations on Critical Disability Studies, a current approach which is an intellectual and educational discipline studying the implication, nature, and consequences of disability as a cultural, social and literary construct. For this reason, this article tries to find out the applicability of the narrative prosthesis through the author-play relationship focusing on references from the play and related works. In this respect, this article will also examine McDonagh’s play, which is enriched by ‘disabled’ characters, in the lens of ‘cultural and literary investment’.

In addition to being a multidisciplinary field of study, critical disability studies have also been adopted by literary thinkers as one of the most widespread work areas of recent times. Narrative Prosthesis, introduced by Sharon Snyder and David Mitchell, both of whom are key theorists of critical disability studies, discusses the way narrative makes use of disability as a tool of representation or metaphor, but fails to further cultivate disability as a multifaceted approach. Thus, the narratability of disability here depends on obtaining some conclusions on the normality of the characters. Martin McDonagh’s characters in The Pillowman represent disabled persons who behave as a “crutch upon which literary narratives lean for their representational power, disruptive potentiality, and analytical insight” (Mitchell & Snyder, 2000, p. 49). However, this leaning is driven by the psychopathological aspects of the characters. The term psychopathology, which has its root in the Greek words ‘psyche’ (soul), ‘pathos’ (suffering) and ‘logos’ (the study of), refers to the appearance of behaviour that points out the incidence of a psychological chaos. Some of the greatest strains of modern society are the psychological ones. World wars are also the greatest factors that increase the anxiety of modern society. Reflecting on the uncontrolled post-war society, McDonagh reveals man’s psychopathology through the psychological and mental strains of various characters. In this play, characters are in a struggle with a psychological situation. Interrupted speech, unconnected expressions, collective monologues are a sign that consciousness is not in a normal state at all. For instance, dialogues between Katurian and Michal and the detectives are indicative of a mental and psychological illness. In the same way, the words spoken are a reflection of depressed mood, and their timid movements are those of physical decadence. The purpose of this study is to try to explain normality as against psychopathology in characterization within The Pillowman taking Narrative Prosthesis to the centre. In order to accomplish this purpose, the work is divided into several sections. The introduction to the study includes a number of analyzes and literature on critical disability studies. In this context, the reason why this work emerged is explained, and some writings by important scholars are cited. The emphasis is placed on the concept of ‘narrative prosthesis’, a new model emerging from the ideas of different scholars in this field of study, and notes on the purposes and examinations that cause this concept to gain importance are evaluated. In addition to the concept of narrative prosthesis, the notion of ‘materiality of metaphor’, another important theory with a different narrative connotation, is also examined. Later on in the work, the main subject comes to the fore and an attempt to relate McDonagh’s The Pillowman to the narrative prosthesis concept is made. On this subject, the study attempts to gain semantic integrity with various quotations from the play. Through the conclusions and interpretations made, the work supports the above-mentioned concepts and definitions. 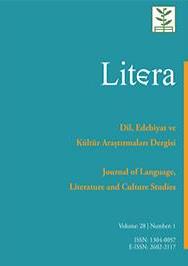